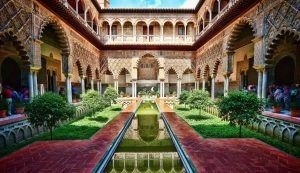 Game of thrones scenarios in Seville
Noticias · News
by Casual Hoteles
Seville has many and varied resorts to visit, but Game of Thrones fans are in luck , as Seville has been chosen for numerous shots throughout its seasons. Here we leave you some of the Game of Thrones scenarios where the characters have already passed and which we are eager to see in the series. From our Casual Sevilla de las Letras and Casual Sevilla Don Juan Tenorio hotels you can even walk to some of them. So if you already wanted to visit Seville, here are some more reasons for it.

The Real Alcazar of Seville is a fortified palace, in it you can observe the different historical stages that it has lived through, although the original palace was built in the High Middle Ages (S.XIV), some vestiges of Islamic art are preserved and, from the stage after the Castilian conquest, a Mudejar palatial space and another in the Gothic style. It was the setting chosen to represent the Water Gardens of the city of Dorne in 'Game of Thrones'. It is located 5 minutes walk from Casual Don Juan Tenorio and 12 minutes walk from Casual de las Letras. Do you want to visit it? You can find all the information here.

Other Game of Thrones scenarios are the Old Shipyards that were specialized in the construction of galleys that were declared a Historic-Artistic Monument on March 13, 1969. New location for the seventh season of 'Game of Thrones' where a fight scene will be recorded. Can't wait to see this scene! It is located a 10-minute walk from Casual Don Juan Tenorio and a 16-minute walk from Casual de las Letras.

New location for the filming of the seventh season. They are located half an hour from Seville about 18km.

This town has several places where scenes were recorded, such as the Plaza de Toros, the Osuna Museum and the Quarries. Soon scenes will be shot at the University and the Collegiate Church. Osuna is 1 hour and 20 minutes from Seville, about 88km. but once there, you could see all the resources in about 40 min. walking. In short, Game of Thrones scenarios , charming locations located in Seville, a real pride!