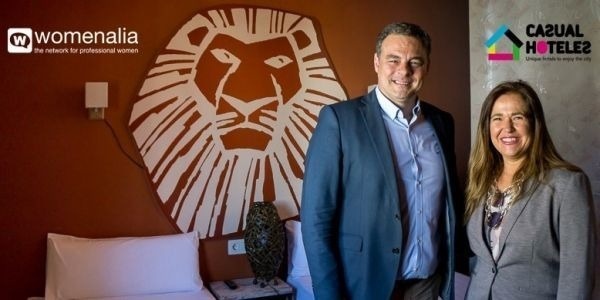 Globally, only 25% of women hold a leadership position in the tourism sector.
Prensa · Press
by Casual Hoteles
According to a study by Turijobs, as far as the tourism sector is concerned, two out of three women claim to have suffered employment discrimination at some point in their professional career, affecting this to a greater extent in middle managers (74%) and in job profiles. manager (70%).
According to UGT, women are just over half of employees in the Spanish hotel industry, about 60%. However, their average salary is 25% less than men in the same profession.
As a result of the collaboration between Womenalia and Casual Hotels, Women At Tourism is launched, an observatory dedicated to the study and visibility of women in the tourism sector. Madrid, May 21, 2018.- The International Labor Organization (ILO) in its annual report "International perspectives on women employed in hotels, restaurants and tourism" shows how, in general terms, it is men who occupy managerial positions and positions of greater responsibility, despite the fact that women represent between 60 and 70% of workers in the industry. A report prepared by Turijobs in order to evaluate employment discrimination based on gender in the sector concludes that the sector most affected by employment discrimination is Kitchen, with 84%, followed by Marketing and PR (76%) and Travel Agencies (74%). However, women are becoming more representative, climbing management positions in the hotel field, tourist agencies and brokerage, and aviation, which, in recent years, has seen an increase in the number of female pilots. It is undeniable, therefore, that tourism is one of the activity sectors with the highest female participation. In order to contextualize this reality by making the current situation of the sector visible, Womenalia, in collaboration with Casual Hotels, launch the Women and Tourism Observatory.
More than half of Casual Hotels management positions are held by women. Specifically, 53% of management positions in the Valencian hotel chain are held by women. In addition, 69% of its workforce are women.
The main lines of action of the Women and Tourism Observatory will be aimed at: Increasing the visibility of the importance of the role of women in the tourism industry, contributing to the recognition of the importance of their presence in the development of achievements in the sector.
Support women's leadership in tourism at all levels: public sector, private sector and community management. Create awareness of the need to adopt measures that facilitate the incorporation of women into the labor market accompanied by an equitable distribution of household tasks, which reduces the overload of responsibilities and guarantees an improvement in the quality of life.
Analyze the lack of security experienced by women in tourist destinations, helping to reduce the negative impact of the binomial women-tourist attractions. Women At Tourism Observatory Womenalia, as the first professional network for women, whose objective is to achieve equality between men and women mainly in the labor market, promoting the presence of women in managerial positions, in the creation of companies and the generation of self-employment joins Casual Hotels, representative of innovation in the hotel sector, in launching the first Women and Tourism Observatory whose purpose is: To analyze the percentages of women in the sector, who they are, what positions they hold and their careers. Interview women with outstanding professional careers.
Present the economic evolution of the sector, with data that reveal the trajectory and analyzing the possible risks and difficulties or opportunities that may be faced. As well as the influence and adaptation of the digital transformation, how this digitization affects professionals and companies in the sector.

Casual Hotels, urban tourism, comfortable and innovative
Tourism represents more than 10% of the Spanish GDP. In 2017, 82 million tourists arrived in our country, 8.9 more than in 2016. Our country continues to be a leading world tourist power. More than 2 million people in Spain work in the Tourism sector. 12.1% of Social Security affiliates belong to the tourism sector. A clear example of innovation, improvement and transformation of the sector is evident in Casual Hotels.
The Valencian hotel chain stands out for its unique way of understanding hospitality and its special treatment of customers, their families and their pets. Awarded at the 2018 Hostelco Awards with the "Best Hotel Concept" Award, Casual Hotels is a chain that revolves around comfort, theming and technology at customer service as a hallmark. In August 2016, the chain became the first fully "Petfriendly" Spanish chain, each hotel has several rooms dedicated to those reservations that come with pets and has a commitment to society as long as its line of business remains made up of client, worker, capital, supplier and company.

Womenalia.com is the professional women's network that helps promote and promote the presence of women in managerial positions, the creation of companies led by women, the generation of self-employment and the reconciliation of personal and professional life. To do this, Womenalia offers professional women a collaborative online platform that integrates a social network, a content portal and professional tools. The ultimate goal is that professional women can develop professionally more quickly and efficiently, also promoting their visibility and notoriety in their reference markets. Womenalia has been a finalist in the Cartier Women's Initiative Awards, in its 2013 edition, being the first Spanish company to achieve it in the last six years. In addition, Womenalia has been chosen by the international non-profit organization that supports female entrepreneurship, Astia, among 3,000 projects as one of the 21 startups with the most development potential in the United States.
Twitter:@womenalia
Contact: Montse Casasempere, Social Media Manager, Womenalia mcasase@womenalia.com
T: 91 192 05 00

Casual Hotels currently has eleven hotels under the umbrella concept of "urban, comfortable and innovative tourism", distributed between Madrid, Valencia, Malaga, Seville and Bilbao. In addition, its expansion plan includes openings in Malaga, Ibiza and San Sebastián throughout the years 2018 and 2019. The company offers different services included to offer an easier way to travel. In 2017, it had a turnover of seven million euros, grew by 67% and reinvests 10% of its income in its establishments each year. In August 2016, Casual Hotels became the first Spanish chain entirely PetFriendly and has different rooms reserved for people traveling with their pets. It has received the award for the Best Hotel Concept of Hostelco 2018 and the Tourism Award for Innovation 2016.