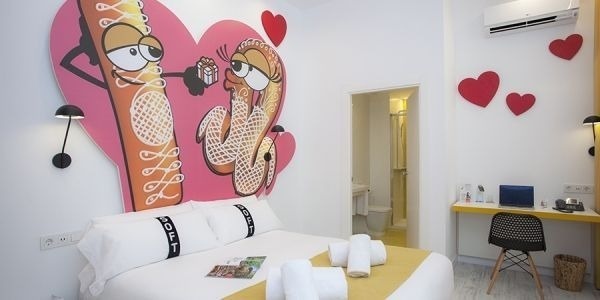 Socarrat Studio themed three rooms of the new Casual Socarrat Valencia hotel
Prensa · Press
by Casual Hoteles
Casual Hotels and the Design and Communication Agency, Socarrat Studio , have established a collaboration to theme some of the rooms of the new hotel that the chain has inaugurated in the city of Valencia.
A hotel, which opens its doors at number 38 Calle de la Paz in the heart of Valencia, a few days before the Tomatina de Buñol is held, so that whoever occupies this room can fully immerse himself in the most peaceful battle international. The image of La Tomatina was developed 11 years ago by Socarrat Studio, which also created icons as prominent as Sant Donís or the imagery that surrounds the world of paella.
With this establishment, Casual Hotels wanted to pay homage to the city of Valencia. In this sense, the founder of Casual Hotels, Juan Carlos Sanjuán, has indicated that everything is due to the fact that "València is the city we love, the city that saw us born and the city that has made us leaders in the theme hotel market. from Spain. This opening, among all the others, fills us with pride and emotion”.
For his part, the manager of Socarrat Studio, Vicente Sanfeliu, has pointed out that this collaboration “is an honor, because our relationship with Juan Carlos Sanjuán goes back to our origins, both of them, and we have followed each other closely. We have followed and we have been happy with the successes of the Casual Chain and they have seen us, in the same way, evolve”.
Similarly, Sanfeliu has pointed out that "mutual admiration has always united us and it was a matter of time before our paths came together in some joint project such as this Hotel Socarrat, whose theme fully coincides with the focus of the projects in which that we have developed."
The hotel, located in a completely renovated 19th century building, has 35 rooms and a total area of 1,450 square metres.
Casual Hotels, founded just over five years ago by Sanjuán, has two other hotels in the vicinity of the Plaza del Ayuntamiento in the capital of the Valencian Community (one themed with vintage aesthetics and the other dedicated to the world of cinema). Similarly, it has three other hotels in the city, these dedicated to music, arts, and civilizations.