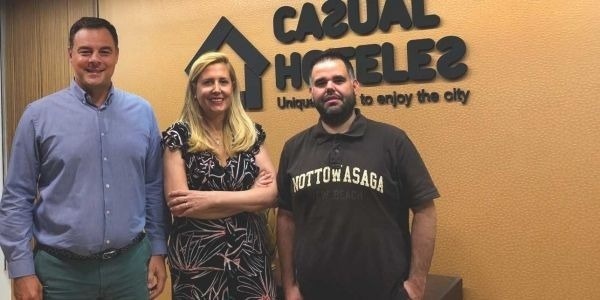 Casual hotels, new sponsor of the Picken Claret basketball club
Prensa · Press
by Casual Hoteles
The agreement, signed by Juan Fuentes, president of the Claret basketball club, and Juan Carlos Sanjuan, CEO and founder of Casual Hotels, will last for 3 seasons, including both the women's league 2 and EBA teams, as well as all the academy teams. , which means giving support to the 400 players that make up the club.
The sponsorship agreement includes, among other things, the placement of the Valenciana hotel chain logo on the game pants and warm-up shirts of all the teams that make up the structure of the Claret basketball club, from Benimaclet (Valencia).
"The signing of this agreement, for three seasons, allows us to continue believing and working with the greatest enthusiasm, not only in the present, but also in the medium term, since it joins Picken and Teika in supporting Valencian basketball. No We have more than words of thanks to Casual hotels, for listening to us, valuing us and betting on our project" in the words of Juan Fuentes, after closing the sponsorship agreement.