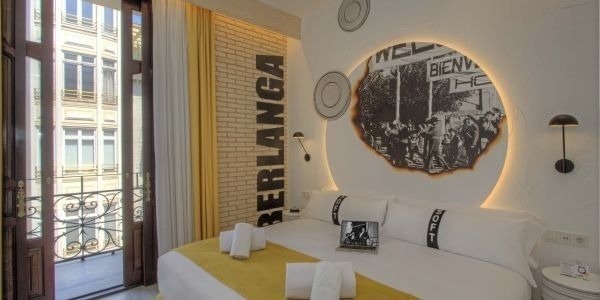 Casual Hotels opens its Casual Socarrat hotel in Valencia and sets fire to the Valencian hotel industry
Prensa · Press
by Casual Hoteles
Casual Hotels has opened its sixth hotel in the city of Valencia, whose name is Casual Socarrat and which is completely themed around life in the city of Túria, where the company has its headquarters. The hotel, located at number 38 of the central street of La Paz, has 35 rooms and a total area of 1,450 meters.
The building, from the 19th century, has been completely renovated and themed throughout 2019, and some of its themed rooms are dedicated to the Fallas, gunpowder, the city's sports teams, or famous Valencian personalities such as Luis García Berlanga . “València is the city we love, the city where we were born and the city that has made us leaders in the market for themed hotels in Spain. This opening, among all the others, fills us with pride and emotion”, explained the founder of the company, Juan Carlos Sanjuan.
Casual Hotels, founded just over five years ago by Sanjuan, has two other hotels in the vicinity of the Plaza del Ayuntamiento in the capital of the Valencian Community (one themed with vintage aesthetics and the other dedicated to the world of cinema). Similarly, it has three other hotels in the city, these dedicated to music, arts, and civilizations.
At this time, it is preparing a new hotel next to L'Alqueria del Basket and the Fuente de San Lluís Pavilion, which will be called Casual del Deporte Valencia, which will open throughout the year 2020.
Likewise, it projects the launch of a new chain of hostels that will be inaugurated with two new establishments and an initial number of 124 beds.
"Despite the fact that we are in the midst of a national and international expansion phase, and that we already have hotels in Portugal and are preparing to open in Rome, Valencia is our cradle and we will always be part of the city's landscape", adds the general manager of the company.
The opening of the Casual Socarrat Valencia hotel has represented an investment of 1.6 million euros.
Casual Hotels plans to close the year 2019 with a figure of around 14 million euros in turnover and will address the objective of 22 million euros for the 2020 financial year.
After opening hotels in Porto, Lisbon, San Sebastian and Malaga in recent months, the chain now has 19 establishments and a total of 1,000 beds.