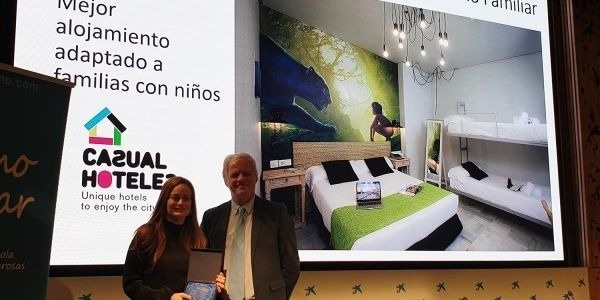 Casual Hotels receives the award for Best Accommodation Adapted to Families with Children, endorsed by the Family Tourism Seal
Prensa · Press
by Casual Hoteles
Yesterday was the delivery of the III Family Tourism Awards of the Family Tourism Seal, endorsed by the Spanish Federation of Large Families (FEFN). Awards whose objective is to recognize the endorsed companies or entities that have best adapted to the requirements of excellence of said Seal, in which Casual Hotels received the award for " Best Accommodation Adapted to Families with children ", for being adapted to the needs of families in their time off.
The award was collected by Nerea Urbán, Casual Hotels Communications Coordinator, on behalf of Juan Carlos Sanjuan , CEO of the company, who was unable to attend the event because he was in the Convention, but wanted to be present with the screening of a video in gratitude for the award . You can see the video here.
The awards ceremony took place within the IV Family Tourism Product Club Conference, in which, in addition, they presented the VII Study of Family Tourism in Spain , together with DNA Experts in Tourism and Leisure, as well as training in Marketing in family tourism by Alejandro Flores, CEO of Nextep.
The event, which was held at CaixaForum Madrid, was chaired by Mr. José Manuel Trigo, Vice President of the Spanish Federation of Large Families; Mr. José Ramón Castiñeira, General Director of Tourism of the Community of Madrid and Mr. Isabel Mª Oliver, Secretary of State for Tourism.
For its part, Sendaviva received the award in the category of "Best communication and marketing strategy focused on families"; Cidiano Weekend in the category of "Best creativity initiative for families"; Segovia in the category of "Most innovative destination in family tourism" and Másdecuatro in the category "Best initiative specializing in families". The special prize for the entity that has made the most commitment to the Family Tourism Seal project has gone to Paradores de Turismo this year.