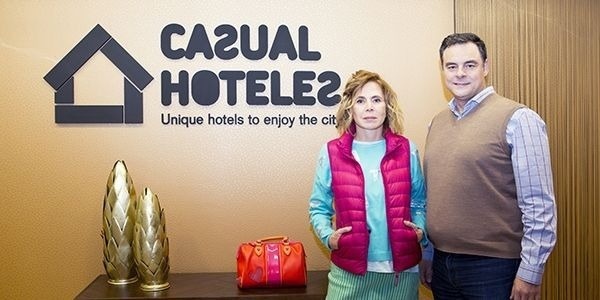 Agatha Ruiz de la Prada will design the next Casual Hotels themed hotel in Valencia
Prensa · Press
by Casual Hoteles
Agatha Ruiz de la Prada will design the interior design of the new hotel of the Casual Hotels chain, which will be called Casual Dreams Valencia.
The famous Spanish designer and the general manager of the chain, Juan Carlos Sanjuán, signed the agreement last Wednesday prior to Agatha beginning to design each of the hotel's 46 rooms.
Casual Dreams will be located in a building in the heart of Valencia, on Calle Pascual i Genis, a few meters from the main brands with a presence in the city.
The creator will also design the uniforms of the employees of the entire chain in a unique project for Casual Hotels, which already has nearly 240 workers.
“How happy I am to make my first hotel in Valencia. It is an adventure that made me very excited”, said the creator.
“Casual Dreams Valencia will be a hotel for young people, for normal people, an unpretentious hotel, a hotel where everyone has access to Agathizar”, explained Agatha Ruiz de la Prada, who next week will present her new creations at the Cibeles Footbridge.
Casual Dreams Valencia is scheduled to open its doors next June 2020. The planned investment for the work is 1.5 million euros.
As explained by Juan Carlos Sanjuán, CEO and founder of Casual Hotels, "having Agatha Ruiz de la Prada is not only a privilege for our family, but also a dream come true."
"It was obvious that for this reason, the new hotel will be called, precisely, Dreams," he added.
"The truth is that I'm doing it with a wonderful and fun family," said Agatha about Casual Hotels, the themed hotel chain that has changed the concept of urban stays in Spain.
17 HOTELS IN SPAIN AND PORTUGAL
Founded by businessman Juan Carlos Sanjuán in 2013, Casual Hotels has 17 open hotels in Spain and Portugal.
The company closed the year 2019 with a turnover of around 13 million, and hopes to reach the figure of 22 million this year.
In the next 12 months, the company will open seven new hotels, including one in Italy.
By 2023, it expects to open new places also in France, the Netherlands and the United Kingdom, to have 30 hotels and a turnover of close to 50 million euros, with an annual Ebitda of between 10 and 12 million euros.
All of them are independently themed and each of the more than 900 rooms currently offered by the chain is totally different.
The Casual hotels, whose motto is “unique hotels to enjoy the city”, in addition to being themed, are urban, accept pets and offer their visitors free mobile internet.
The company won the prestigious Hostelco 2018 Award for Best Hotel Concept.
Casual Hotels works not only with a financial objective, but also to hope to contribute and help improve the cities that host it.
The company distributes a percentage of its profits among its employees, offers private medical insurance to all of them and has established a specific care program for its chambermaids, including physiotherapy for all of them.