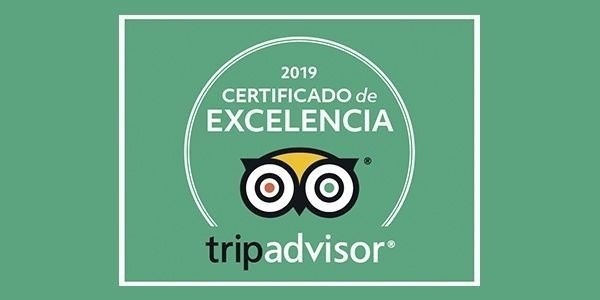 Casual Hotels obtains the Tripadvisor Certificate of Excellence 2019 in seven of its establishments
Prensa · Press
by Casual Hoteles
The Casual Hotels chain has obtained the certificate of excellence granted by Tripadvisor in 7 of its establishments. This recognition takes into account the quality and quantity of opinions expressed by travelers on the world's largest website in a period of one year.
Specifically, the hotels that have received recognition are Casual de las Letras Sevilla, Casual Gurea Bilbao, Casual del Cine Valencia, Casual de las Artes Valencia, Casual Vintage Valencia, Casual del Teatro Madrid and Casual del Mar Málaga.
“We are very proud to receive this Certificate of Excellence based on the opinions and qualifications of our clients. We want to thank each and every one of them and tell them that we continue to work on our commitment to continuous improvement”, said the CEO of Casual Hotels, Juan Carlos Sanjuán.
To determine Certificate of Excellence winners, TripAdvisor uses a proprietary algorithm that takes into account the quantity, quality, and recency of reviews and comments submitted by TripAdvisor travelers over a 12-month period, as well as the age of the business and its ranking in the Popularity Index on the site.
The average of the general ratings of the users about the business must remain in at least 4 out of 5 bubbles on TripAdvisor, have a minimum number of opinions and have had the profile on that website for a minimum of 12 months.
The hotel chain was born in 2013 in Valencia and is specialized in themed hotels. Since then it has expanded throughout Spain and has already made the leap to Europe with the forthcoming opening of Casual Belle Époque Lisboa. In addition, it plans to open another hotel in Porto and its international expansion will be consolidated with two new openings in Rome.
The group's goal is to reach 960 rooms by the end of 2019, which means doubling the figure with which it closed last year.
Currently, it has a total of 14 hotel establishments. The latest openings have been two hotels in San Sebastian. plans to open another this summer in Valencia and, after summer, another two in Malaga and Cadiz.